↓
Home→Archived→Cancer Fund→ST1: Up the Garden Path and More to Giveaway (for Cancer Fund Donors)

It’s been a very long time — over a year — since we had a fund raiser for the RetroRoleplaying Cancer Fund (which helps pay down the huge bills associated with my wife’s cancer treatments from 2007-2008). I’ve been asked several times when we were going to have another. The problem has been a lack of items to give away. As of yesterday’s mail, this is no longer a problem. I received a package from a Microlite74 GM in Belfast containing a very nice copy of a rare D&D module from the UK: ST1 – Up the Garden Path.

If you are like me, you’ve never heard of this module. It is a special module written by Graeme Morris and Mike Brunton produced by TSR UK and sold at the 1986 National Garden Festival and the 1986 Games Day convention. From glancing through it, all I can say is it is one of the strangest D&D modules I’ve even seen. It is set in a pocket dimension that looks like the grounds where the 1986 National Garden Festival was held (at Stoke on Trent for those more familiar with the UK than I am). The adventure itself reminds me of Gygax’s Dungeonland adventure — very whimsical and humorous (in a British way). The adventure is for 5-8 characters of levels ranging from 4 to 7. I’m not sure I’d run it, but then I never had much luck with Dungeonland.

From the back cover:

The day has been long and hard and, as night falls, you gratefully surrender to the soft, silent blackness of well-earned sleep.

Then the dream comes.

You are seated on a throne in a cavern where the sun has never shone; where no voice has ever spoken. Yet you are not alone. Through the darkness, silent figures are moving. Blacker than black… formless yet menacing… advancing towards you from every side….

You feel their touch; icy claws plucking at your skin and hair, lifting the throne and carrying you helpless on a journey from darkness into further darkness, from silence into deeper silence. You scream, and a million anguished, reedy voices answer your call.

…and the dream is real.

I’d like to thank Ryan for sending me one of the three copies(!!) he found over the summer as gives me a nice item to base a Cancer Fund Drive around. As most readers know, my wife is recovering from oral cancer (with her next CT scan coming up in early November) and that I worked on the original Microlite74 as way to cope during her recovery from 6 weeks of radiation treatment in 2008. We are some of the 40 to 50 million people in the US who do not have health insurance and do not qualify for government aid as we live in Texas and have no children. The cancer treatments and related expenses have cost over $120,000 so far. While almost three-quarters of this has been absorbed by hospital foundations or paid by previous fund drives, monthly payments by us, and the like, we still owe quite a bit. Our last fund drive was in July of 2010, but we’ve now accumulated enough old school items to hold another.

Everyone who donates anything at all (even a dollar) to the RetroRoleplaying Cancer Fund gets access to a few special downloads (like pdfs of two 1970s D&D fanzines, a special edition of Microlite74, and more) as described on the RetroRoleplaying Cancer Fund web page. Anyone donating $25 or more during this fund drive will be listed as a sponsor in the upcoming digest-sized versions of Microlite74 3.0.

Anyone who donates from now through October 15, 2011 will be eligible for some extra goodies in addition to the special downloads everyone who donates gets and sponsorships. 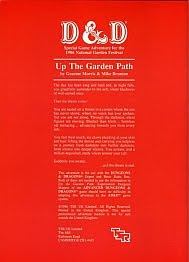 First, for every $10 you donate you will receive one chance in a raffle for the copy of the ST1 Up the Garden Path module described above. Condition note: it’s in what I would call very good condition. The major defect is a very light cup ring on the back cover. It’s so light that I can’t get it to show up in a picture, but you can clearly see it if you hold it at just the right angle to the light. I suspect it was made by a water glass and not by coffee or soft drinks. Anyone who has donated to the RetroRoleplaying Cancer Fund in any amount during the last year will been given one free chance in this raffle.

As was done in our fund drive last year, the major item is being awarded by raffle. This should give almost everyone able top donate a chance at the big prize — even if they cannot afford to donate a lot. As always, everyone who donates any amount (even just a dollar) gets access to these special PDF downloads: The Grimoire #1, The Grimoire #2, Microlite74 2.0 Special Edition, Hidden Valley House Rules (B/X D&D), and more.

If you would like to help but cannot make a donation, please help spread the word around the blogsphere (and other places). In fact, if you make a post to your blog talking about this fundraising drive and post a link to your post in a comment to this post, we’ll give you one entry in the raffle. Note: Your blog will have to have some way for us to email you if you get lucky or will will not be able to get your prize to you. I never could pass Mind Reading 101.

To get help us pay our cancer treatment related bills (and to get access to some special downloads and possibly the above mentioned items), send a donation in any amount — small or large — to me via Paypal. My apologies for having to ask for donations and my heartfelt thanks to everyone who donates. If you cannot donate but wish to help, please spread the word about my request and offer. Thank you very much in advance.