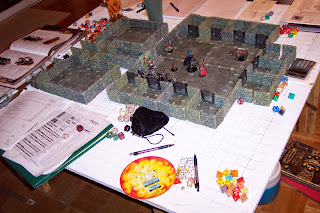 2014 marks the 40th anniversary of the iconic roleplaying game Dungeons & Dragons, and thus far it’s been far more than a note on the calendar. Often, a major milestone for an entertainment product will be marked simply by a commemorative badge on covers or new editions in stores. But with the 40th anniversary of Dungeons & Dragons, the game is experiencing something of a turbulent year.

For starters, there’s the issue of film rights, with various studios actually battling in court for the right to make a Dungeons & Dragons movie. But that’s a separate issue that likely won’t be resolved for some time. Aside from the film debate, Dungeons & Dragons as a game is facing the larger problem of attempting to remain relevant after a 4th Edition that many found disappointing.

To some extent, the idea of Dungeons & Dragons fighting for relevancy almost seems blasphemous. Yet an article in WGBH pointed out earlier this year that by 2012, D&D ranked only as the third best-selling roleplaying game. For reference, the wildly popular Pathfinder took over the top spot. There will always be fans loyal to the D&D brand, but at this point there’s no denying the fact that other games—many of them directly imitating D&D—have succeeded in making themselves appealing to modern consumers.

Yet can Dungeons & Dragons really be struggling when its influence is so apparent across all spectrums of gaming? Think for a moment about different genres of table top games and video games—you may be surprised just how many of them trace back to the game widely credited with starting up the roleplaying genre, and popularizing fantasy models as well.

The first branch of influence comes quite simply from the title of the game! While D&D certainly didn’t invent dragons, it did help introduce them to gaming spheres, and these days they seem to be everywhere. Popular video games like Skyrim and the Diablo series stand out as some of the biggest and best recent examples, but dragons have permeate all levels of gaming for years. Even in the online casino industry, the InterCasino platform—the longest running site in the industry—hosts numerous slot arcades designed with dragon themes (and titles) that you can view here. And in mobile apps (which can be said to represent the newest form of video games), dozens of dragon-related games are available in stores—some of them even playing with a roleplaying format.

Ultimately, D&D’s influence in the gaming industry is so deep and broad-reaching that CNN even made it the focus of its 40th anniversary write-up. Going all the way back to 1988, the article cited Pool Of Radiance as the first video game to be developed based on D&D. Given some of the games just mentioned, it’s fair to say that the video game market has been feeding off of D&D lore for over 25 years. In that regard, it’s difficult to comprehend the idea of the original game struggling in any sense give that it’s still being sold and maintains a passionate audience.

And right on cue, it seems that Hasbro and the folks behind D&D have created a new version to satisfy a modern market that was drifting away. To some extent, D&D may never regain its former popularity, simply because video games (and their increasing focus on online multiplayer capability) have taken over the industry. But it appears that the newly released 5th Edition of the game has at least helped to put D&D back on track, and it has received a favorable response from players.

Perhaps most importantly, the game seems to have returned to the basics in some respects, resembling all the best parts of its earlier editions. In an article titled “It’s The Perfect Time To Play Dungeons & Dragons,” Kotaku writer Quintin Smith noted: “This is the best, most exciting kind of D&D we’ve had in twenty years, and that’s not all. It’s never been more beginner friendly.” That’s about as strong a review as D&D fans could hope for: the best game in some time for experienced players, but also one that excels in attracting new players.

Whether or not the game can retake the top spot in the roleplaying genre remains to be seen. But for a 40th anniversary, 2014 has been a busy year for the D&D franchise—and possibly a great one as well given the review reviews of the 5th Edition.