Coming next week: the Microlite20 Comprehensive Edition. As I mentioned about a week ago, I discovered a copy of a game I was working on in 2015 on my drive. I have finished it up and will be releasing it next week. The price for the paid version will probably be $7.50.

What is the Microlite20 Comprehensive Edition?

In its raw form, Microlite20 and its more important optional and supplemental sections are a hodge-podge of pdfs produced by different people and formated however the producer of that section wanted. The Microlite20 Comprehensive Edition takes all this material and combines it in one document — all formated the same and somewhat reorganized in places to make it easier to use. The end result is either a 68 page two-column letter sized pdf or a 164 page digest-sized pdf. Both formats are included in the paid version. Both are full of artwork.

What Do You Get?

If you buy the paid version of the Microlite20 Comprehensive Edition you will receive the following:

Is There a Free Version?
Of course, there is. Or there will be within a week or so after the release of the paid version. The PWYW/free version of the Microlite20 Comprehensive Edition will not have art and will probably have slightly smaller type. The PWYW/free version will only come in one format (letter-sized two column pdf) and will not include the player’s guide or ebook versions.

If you are a regular reader of my blog, you probably know. However, if those who do not know: Microlite20 is an OGL role-playing game containing character generation, combat and rules for magic, monsters and level advancement. It ripped the guts out of d20 leaving just the essence of the game. Skills are much simplified, there are no feats and combat is as simple as it gets. Microlite20 is a trimmed-down, subminiature version of the Primary Fantasy Tabletop RPG SRD rules that has been designed to be quick and easy to play. The goal was to create a simpler game, but one where all of the resources of Primary Fantasy SRD (monsters, spells, adventures and equipment) could be used without conversion. It was designed for the 3.5 SRD but will work with the 3.0 SRD or even the PF SRD. The original rules for character generation, combat, magic and level advancement took up a single sheet of paper (of very fine print), making it great for introducing role-playing to new players, gaming one-shot adventures or tailoring into your own game system. Of course, the Microlite20 quickly grew breyond the original (extremely basic) rules with a number of optional systems and supplemental modules (e.g. lists of equipment and spells) designed to make the game playable without needing to constantly refer to a copy of the SRD. Microlite20 is also the basis for a large number of independent variant games in many genres — the current (2017) edition of the Microlite20 RPG Collection has just over 2000 pages of Microlite20 based RPGs. 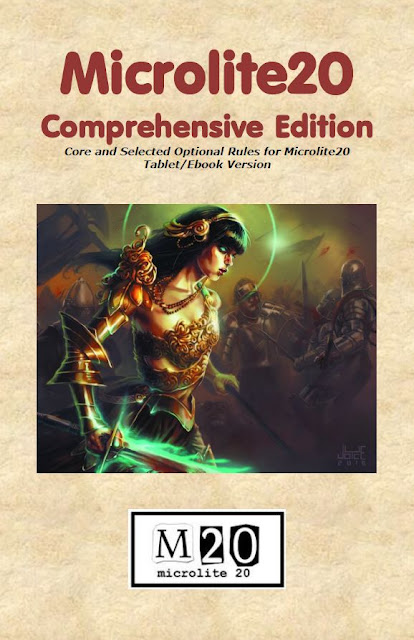 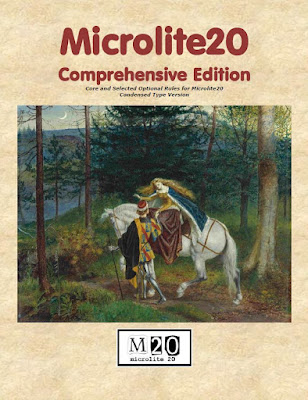 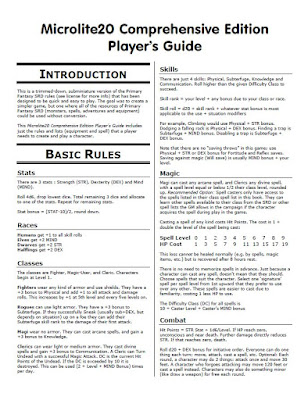