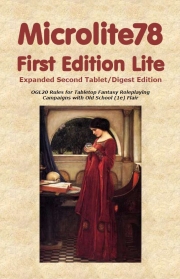 Microlite78 First Edition Lite Expanded Second Tablet/Digest Edition is now available from RPGNow and DriveThruRPG for $9.95. You can purchase your copy from:

This Expanded Second Tablet/Digest Edition is the ultimate version of the second edition of new Microlite78 First Edition Lite. It is suitable for digest-sized printing or tablet viewing (pdf, epub, and mobi versions are included). This 1012 page digest-sized PDF includes new material not included in the standard (or in  the “pay-what-you-want”) version of the second edition of Microlite78 First Edition Lite, for example:

The rules needed to create characters and actually play are short and sweet. Character Creation rules (including race, class, alignment, and background descriptions) are 48 digest-sized pages. The Core rules (skills, saving throws, magic, combat, experience and level advancement) are 22 digest-sized pages. They are written in fairly normal English, not “High Gygaxian”. The rules assume that the GM understands the basic concepts of roleplaying games, but provides information for both the GM and the players on the various “old school” styles of play. Microlite78 First Edition Lite games can easily use adventures and material from early editions of the world’s most popular tabletop fantasy roleplaying game or modern clones.

Microlite78 First Edition Lite Expanded Second Tablet/Digest Edition is an expanded version of  the second edition of Microlite78 First Edition Lite. Core changes from the first edition: The Barbarian and Bard classes were added. The method of determining the number of experience points needed to advance no longer requires recalculating entire experience point advancement charts if optional rules are used. Treasure items are more like those of the first edition of the world’s most popular roleplaying game which makes the game easier to use with published adventures. Rules for character-ruled dominions are included. Gamemaster section with advice for creating and running campaigns added. Some artwork is in color.

Microlite78 First Edition Lite Expanded Second Edition includes three files: a standard pdf and bonus epub and mobi ebook files. The digest-sized pdf is formatted in a single column and uses a larger typeface than the “pay what you want” version. It is suitable for printing or for easy reading on a tablet.

The epub and mobi versions of the Microlite78 First Edition Lite Expanded Second Edition contain tables and many ebook (especially epub) readers display tables in a single column unreadable mess. Epub reader software designed to display epub3 files usually have no problem with the tables. Note that tables in epub and mobi files may not adapt well to small screen devices. Some ebook readers do not display all of the art. The epub and mobi conversions have minor font size issues not present in the pdf version, but are quite usable if your ebook reader displays tables properly.